Project Description and History
Racer’s Edge is a small company in Tennessee that specializes in setting up suspensions for 944-type chassis for performance driving and club racing. We have been campaigning a 944 S2 in F stock over the last few years in PCA events and have done quite well against our competition, mostly 944 Turbos, 911 SC Euros, 911 Carreras, and progressed 911s from G class. Our last 6 races have resulted in 6 podiums with 2 fastest laps in class and 2 class poles. Campaigning a car with the worst power to weight ratio of any car in class has been a challenge, but our strong suit has been handling and when you can go through a corner faster than your competition, you can carry that advantage down the entire straight, and this has proven to be successful to date.
Enter the 968! As 968s also run in F stock (but have not been raced successfully yet by anyone that we know of) at PCA club races, I have been toying with the idea of developing a 968 club racer. Having recently instructed a student with a 968 at Road Atlanta I got the bug even stronger, as the 968 seems to pull much harder than our S2, a result of more ponies and a 6 speed transmission.
Directly after getting back from Road Atlanta my search began, and ended soon after with a Black 1993 968 with 6 speed. The car did not have M030 but it did have the limited slip differential that we would need in our track car. Also, as an added bonus, the common 968 pinion problem had recently been fixed by a Porsche dealer. Included is a picture of the car in its road going state. In general it seems to be a good car, well maintained, with 91000 miles on it. 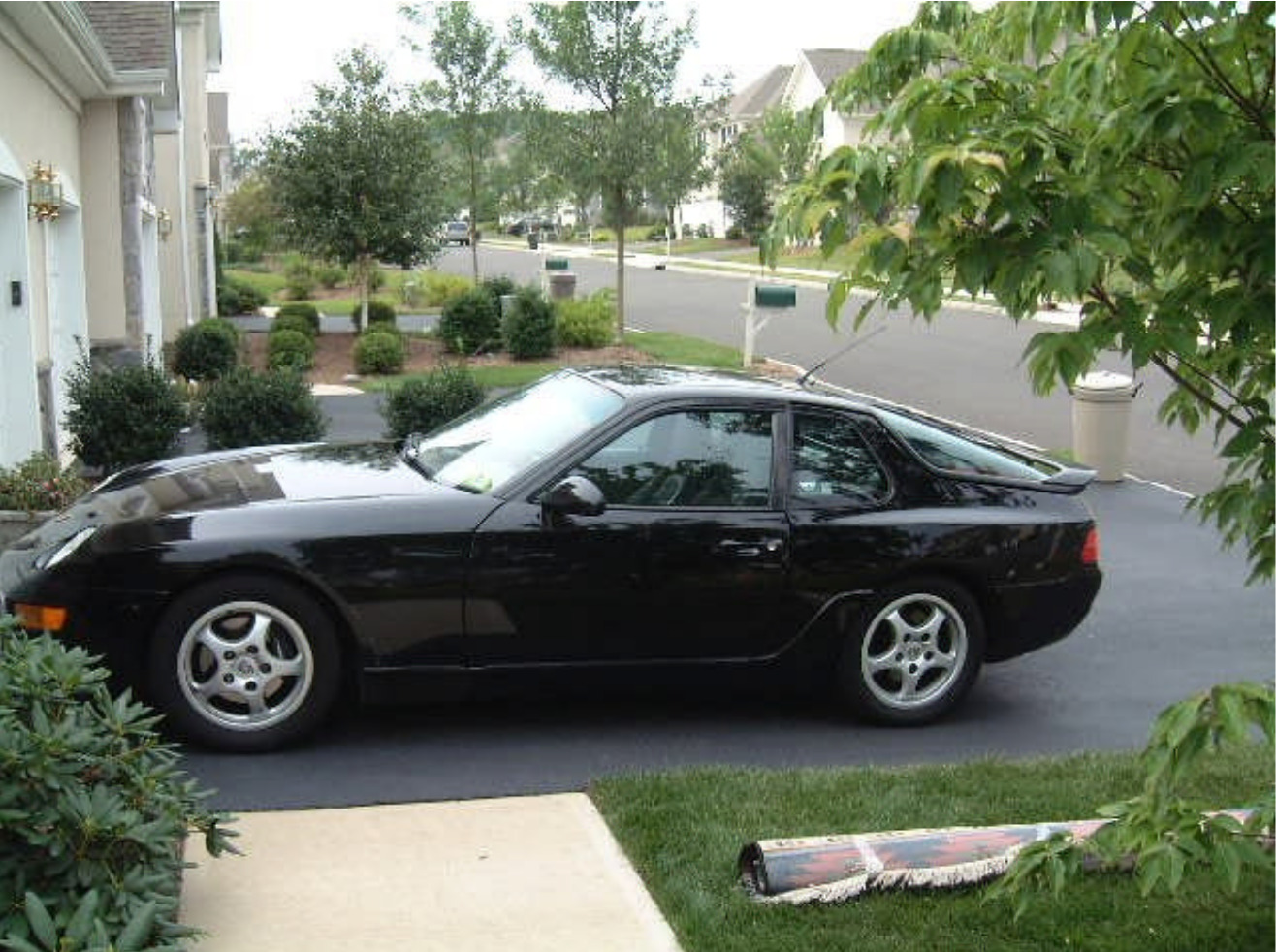 The goal of this project was to develop a 968 into a class dominating, not just winning, race car. Having driven the S2 and discussed this with David Murry, the sometimes Porsche factory driver, he agrees that the 968 should be significantly faster than the S2. David has a unique insight to this comparison as he drove both an S2 and a 968 back in the IMSA days to a national championship.

What we will try to do in this series of articles is document what we are doing with this car during its metamorphosis into a true club racer. The rules of the class are very strict as to what you can and cannot do. As an example, the engine must remain stock from after the air filter to after the exhaust ports, so there really isn’t anything we can do to the engine except balance and blueprint it. Since all Porsche engines are very precise from the factory, we will hold off on even touching the engine until we get some track time on her to see how we do.

Following the rules, suspension is where the most gains stand to be achieved, so this is where we will begin, starting with the rear suspension. Pictured below is a shot from under the 968 of the rear torsion tube and rear wheel suspension. Already removed is the last section of the exhaust system in order to facilitate the removal of the torsion tube from the chassis. 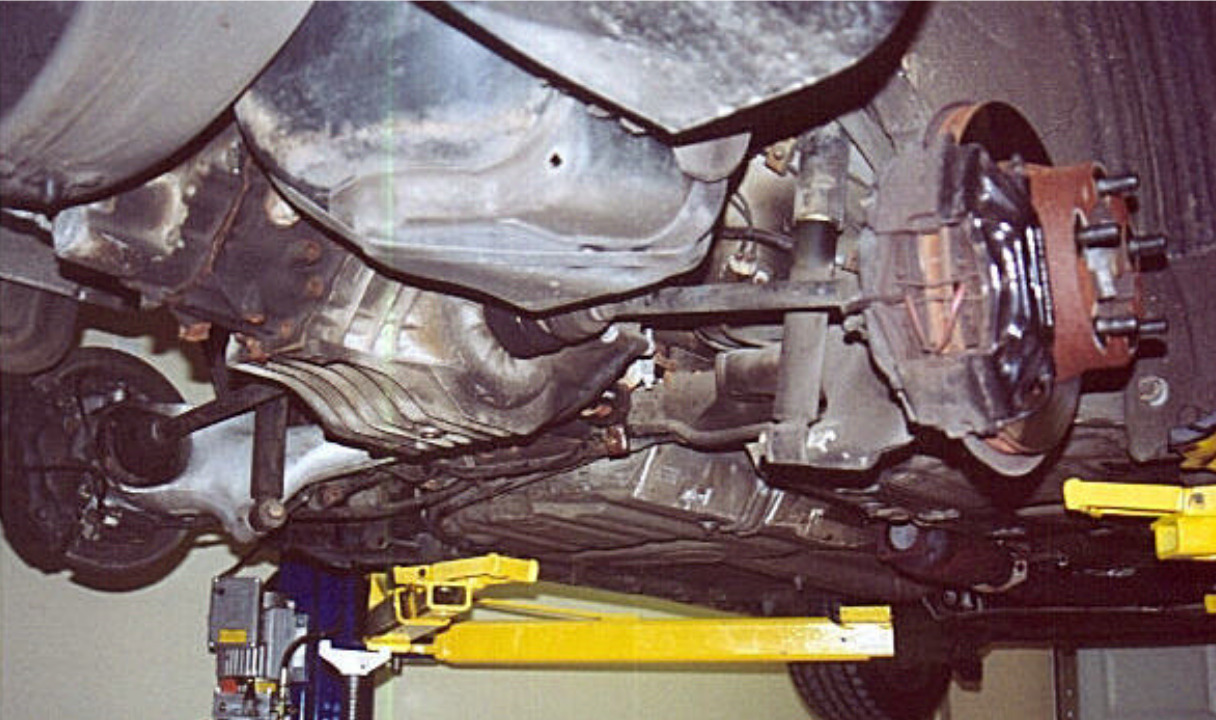 One of the secrets to a true race car lies in its bushings. If you were to look at any proper race car, from CART to F1,one of the first things you would notice is the extensive use of spherical bearings in the suspension linkages. Road-going cars use rubber in order to isolate the chassis from the road as much as possible. This is exactly the opposite of what you want in a race car. In a race car you want to feel every little thing, and feel it immediately so that you can react to it. The other thing spherical bearings provide is exactness. A spherical bearing rotates freely but does not “give” even a millimeter under loading. What all this does in a race car is maintain proper wheel geometry, keeping grip and road feel at a maximum, thereby allowing you to maximize speed through a corner. If you were to read Fred Puhn’s How to Make Your Car Handle or Carrol Smith’s Tune to Win, both books make mention of the fact that all the rubber needs to be removed for the aforementioned reasons.

So our first step in setting up our 968 race car suspension was to remove all rubber from the suspension pickup and mounting points. The picture below of the torsion tube end carrier with the torsion tube spring plate sticking through it (which houses the rear torsion spring). At this point the unit is still installed in the car however it will soon be removed. 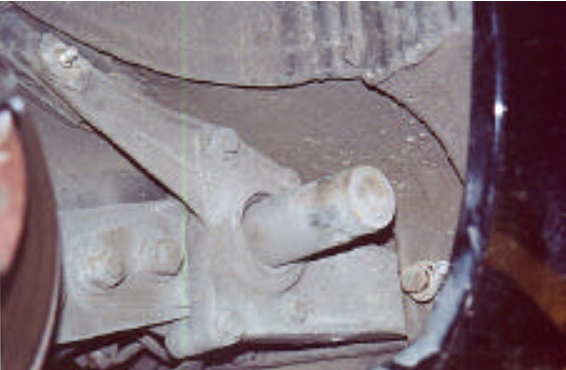 You can see some of the offending rubber in the upper left part of the picture. It is the upper torsion tube carrier mount which holds the carrier to the chassis. We will remove this and replace it with a hard mount. Also to be removed is the rubber which surrounds the spring plate and is located inside the end carrier. The picture below shows the tube once it has been lowered 4 or 5 inches from the chassis. 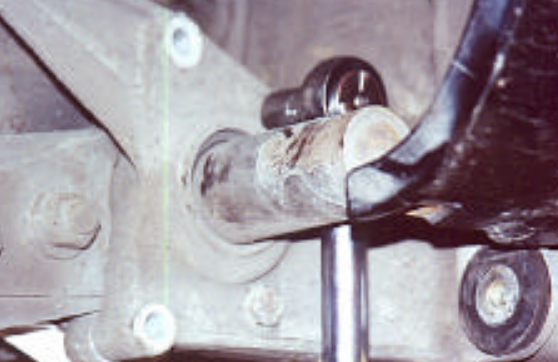 This picture shows the now exposed lower torsion carrier rubber bushings which also need to be replaced with hard mounts. The idea behind the hard mounts is the same as the idea behind spherical bearings, and that is you want to get rid of the isolation between you and the road as you want your suspension held absolutely rigidly to the chassis.

The picture below shows the stock connection between the banana arm and the torsion tube. 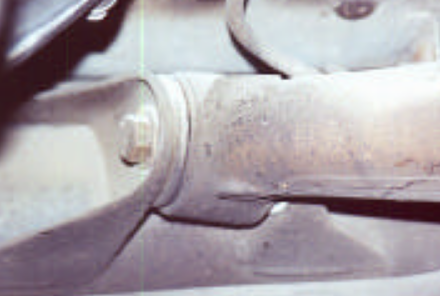 Again this rubber bushing will need to be replaced. In the picture below I have removed the bolt that holds the banana arm to the torsion tube and I’ve started the process of prying out the bushing. 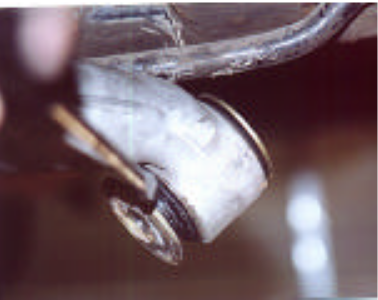 I use a combination of a screwdriver and a punch to get the bushing out (you need to be extremely careful so as not to damage the soft aluminum arm). More removal is shown below. 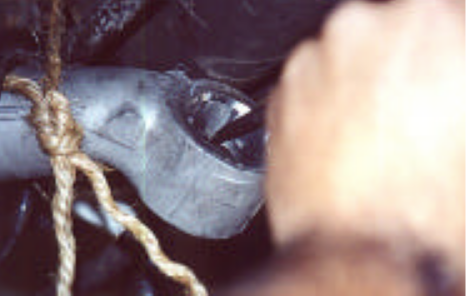 The photos below show a test fit of the replacement spherical bearing cartridge and final fit and finish of the bushing and arm when reinstalled in the torsion tube.

And below is the factory upper mount as compared to the billet Aluminum replacement, before and after installation.

Also notice in the above right picture the grease fitting which has been installed in the end carrier. It can be seen almost exactly in the center of the picture as a small shiny blip, just above and to the right of the front spring plate lock bolt.

This fitting helps address the solution for the last bit of rubber in the rear suspension, the spring plate bushings. The rubber bushings in this area are very soft from the factory.

They are vulcanized to the steel spring plate and are very difficult to remove. Some of the other bushings we have already changed out are a combination of steel and rubber, the steel supports the rubber in an effort to minimize deflection. These spring plate bushings do not have any reinforcement, are relatively thick rubber by comparison, and will allow the rear wheels to change in “toe” under loading. Having forgotten to take a picture of what this looks like, I scanned in a picture from the Porsche parts book. The bushings can be seen easily in this picture, molded on the piece number 6. This picture clearly shows how most of the pieces we have worked on go together. 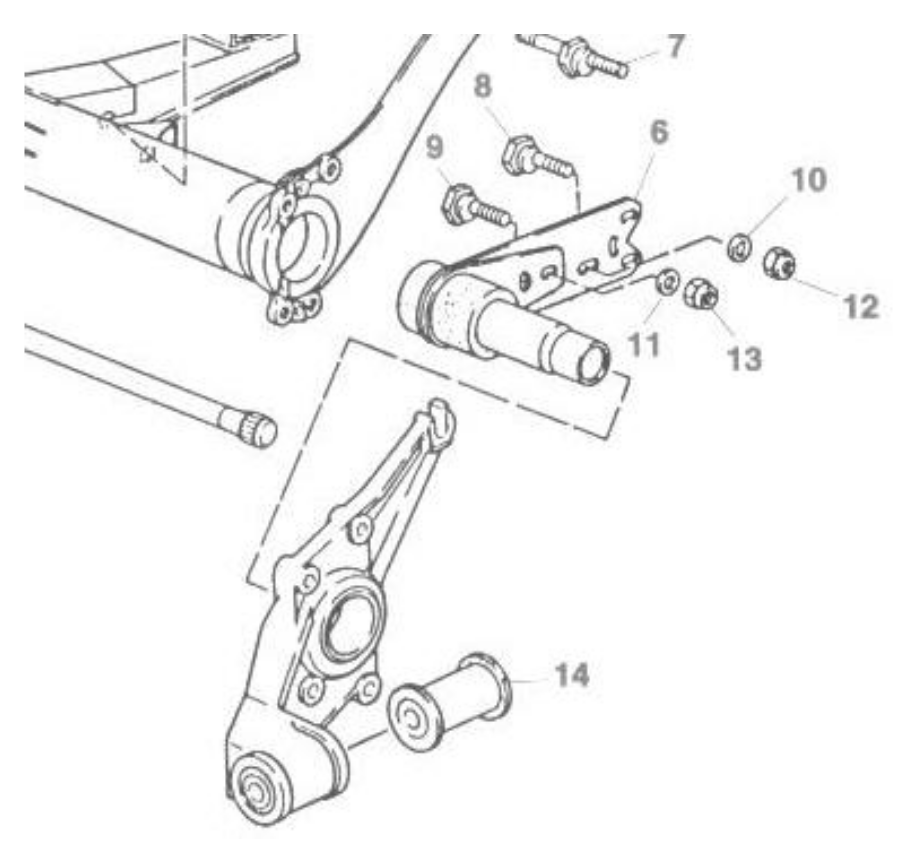 Our usual solution for this is to replace these rubber bushings with Delrin, a very hard and dense, almost plastic-like material, manufactured by DuPont. Delrin has very good properties for load vs. deflection and good wear characteristics. However, since we are trying to build the best 968 racer we can per the class rules, we have elected to build a prototype bearing solution for this area. Hence the grease nipple you saw in the earlier photograph. Most of our bushings use Teflon line spherical bearings which never need grease, this application however was unsuitable for a spherical bearing so we had to use a roller bearing which will require periodic lubrication. This solution is a zero deflection solution as are the other components we installed, which is exactly what we want in a race car suspension.

The rear bushings are now complete. What remains ahead are front bushings and camber plates, front and rear sway bars, custom shocks & struts, stiffer springs, stronger A-arms, brakes, roll cage, race seat, steering wheel quick disconnect, etc. I will address some of these topics in the next section.