I received an email from 944 Cup about Racer's Edge sponsoring the series again in 2011. It mentioned
that you are available to set up cars at the track as well as for sales & service.

I took advantage of your service for set up at the track after I felt my 944 S2 wasn’t balanced quite right,
and was slower through corners than I thought it should be. I just want to thank you again for the
excellent work. After studying my tire wear and listening to what problems I felt I had at the track, you did
a complete evaluation, setup, and corner balance and “got it close” at the shop. At the track, after each
run, you then fine tuned the suspension settings of the car, which resulted in seconds off the lap time.
Perhaps just as important though, you were also able to identify several other issues with the car,
including a faulty air flow sensor that, once fixed knocked off several more seconds a lap! (Thank you for
lending me your very own air flow sensor from your S2, which happened to be in the trailer with us at the
event, but not running that weekend!)

Finally, after repairs and adjustments at the track, but with the ABS still not working, several other
minor repairs still to be done at a later date, and an outside temperature of barely 40 degrees, you drove
the car within a second of your March 2010 qualifying time at the 2010 PCA Club Race at Road Atlanta,
which tells me that I now have a very competitive car (the rest is up to me!)

I consider the weekend to be money extremely well spent. What a difference your 944/996/BMW race
experience makes - half a dozen visits to most shops could not have achieved the basic setup and
combination of springs/shocks/sway bars, etc. that you achieved, and the “real time” setup at the track
was invaluable in getting the car “just right”. Add to that the troubleshooting of the air flow sensor, and
what I learnt by being there and watching you, both when working on the car, and as you ran on the
track, I consider it all time and money well spent, and certainly achieved my goal, and more. Although my
driving of the car was limited to a single short session due to weather and the air flow sensor issue, I
could definitely feel the difference in the handling of the car compared to my last event at VIR, and the
acceleration difference after finding the air flow sensor problem was remarkable. As I had no benchmark,
I would not have known that the car was down on power, but as you have driven and dyno’d countless
dozens of these cars, you could feel something was wrong, and didn’t give up until we found it.

I will highly recommend your services, not only to anyone in the 944 community, but other Porsche’s too
(looking at your results in PCA I-stock, I gather you're pretty good with 996s!) 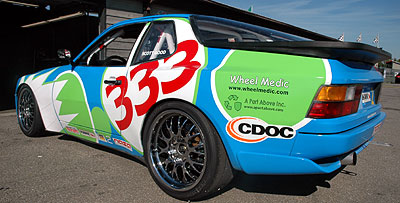 I won the NASA GTS2 National Championship at Mid-Ohio last month and wanted to thank you for being an integral part of that win--and of the rather amazing season I've had this year.

After two years of racing with PCA and NASA in 2006 and 2007, with a smattering of mostly 2nd-, 3rd- and 4th-place finishes, last year I added to my car's already full set of RE bushings a full set of LEDA double-adjustables with Hypercoil springs.

Ever since I got the LEDAs dialed in (with your help...thanks), my car has been both amazing and almost unbeatable. This year, out of 13 races I've had 10 firsts, one second, one 9th (as a result of a penalty--for a pass under yellow--after actually winning the darned race), and one DNF (for not tightening a brake bleeder enough...duh).

Over the course of the year, I've lowered my personal-best lap times from years prior by nearly two seconds at both Mid-Ohio (1:38.7) and Putnam Park (1:18.4), down to times that are pretty smoking for an essentially-stock S2, if I do say so. I'd like to think the driver is a part of the equation but there is no doubt I could not have done this without the suspension components and personal advice I've gotten from you.

Thanks for everything and keep up the great work!

I have a new set of coilovers & springs coming this week - looking forward to changing out the bushings and mounts at the same time.

I have a friend from Atlanta with an identical 986S. He went with y'alls bushings, mounts, etc., and believes it delivered serious bang for the buck. I drove his car at Barber not too long ago, and knew I needed them too! 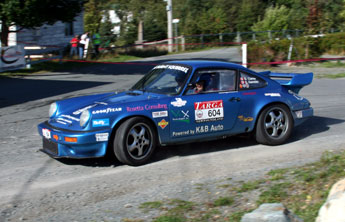 In response to a letter from us:

Glen, I heard though the grapevine that you won the 2006 Targa Newfoundland overall. Is that correct? Did you have the LEDA's on the car?

Yes I won the Targa [Newfoundland] and the LEDAs certainly helped.

Bilstein RSR valved shocks were used for our first three Targas. It took time but we eventually determined that these were not the best shocks for the event. Although the Bilsteins felt fine on the track, they were under damped on normal roads at high speeds. The car would porpoise and always felt a bit unstable. To get the best out of the car the shock must control the tire on normal road surfaces, not just smooth tracks.

Many different shock manufacturers were approached about the handling issues. Most had extensive 911 track experience but very few had 911 rally experience. Eventually a manufacturer with solid rally experience was found [LEDA]. They took our specifications and custom built a set of shocks for the car. A successful test program optimized the damping settings and established great baseline set ups for the wet and the dry. We also found a set up that helped us excel in the tight town stages.

The performance of these shocks transformed the handling of the car by smoothing out the ride over the bumps, improving overall grip and allowing us to be more aggressive over the jumps. The time and effort really paid off.

There is more on my web site, www.openroadmotorsports.com

The LEDAs really improved the grip level and the stability of the car. Before the event I spent a few days testing different settings on the LEDAs and we were able to establish some good set ups for the different types of stages.

We plan to win again this year.

Patrick Garvan from Sydney, Australia here. I just thought I'd drop you a line to say that I'm very happy with my RacerEdge products which were your A arms, billet hubs, and a bunch of bushing/bearings. I have taken a few of my friends for a ride and they were very pleasantly surprised at how compliant the suspension is in its entirety.

You calculated my springs to be 616 front and 320 rear lb/in coilovers so the car should not be very comfortable on the road, but it is easily bearable as evidenced by my friends' reactions There may be some more sales down the track for these guys as I highly recommended you and continue to do so on a number of websites.

When some money comes through that I'm expecting, I am going to get a repeat order for my mechanic the same as I purchased. Long story, but he's been very good to me and I want him on the best and safest equipment like I am. I should know this within a few months.

I puchased the full set of bushings from you prior to the '05 944 Cup season. After missing the first two race weekends, I joined in the fun with a bad air-flow meter and some other engine gremlins. Once sorted out, the car, and my confidence in it, soared. It was truely transformed by the suspension upgrades.

I won my first podium at Watkins Glen in the last weekend of the year. I look forward to the new season and will continue to sing the praises of Racer's Edge.

Thanks for all your help for me and for our series.

Just to let you know

The car is really awesome...my son was turning 1:54's at Mid-America-Motorplex in Pacific Junction, IA before the changes and now that we bolted on your stuff his times are now around 1:44's.

Thanks for your help.

Thank you for the advice you gave me regarding the spherical bearings you sell...(it) was undoubtedly the best performance enhancement dollar-for-dollar I have made thus far.

Had a good weekend at Summit Point where there were 18 I-class cars! The car handled fantastically. We dialed out a little looseness by softening the rear up by two clicks so that it reacted better over the bumps and from there on in the car was perfectly neutral.

I had never been at Summit before but managed to get within 1/10 of the pole and started the race ahead of half the G-class cars. I ended up 2nd after a spin.

I just wanted to thank you

I just wanted to thank you for the advice and the outstanding shocks. I ordered a set of single adjustable Leda's with the canisters. WOW what a difference from my old setup. The car is awesome, very easy to handle, and very very quick. Guys i was chasing last year are now wondering how i got so quick. I owe it to you and your products. Once again thank you. And, when people question me on my car, be assured that I'll let them know why it's so quick through the turns (besides the driver of course).