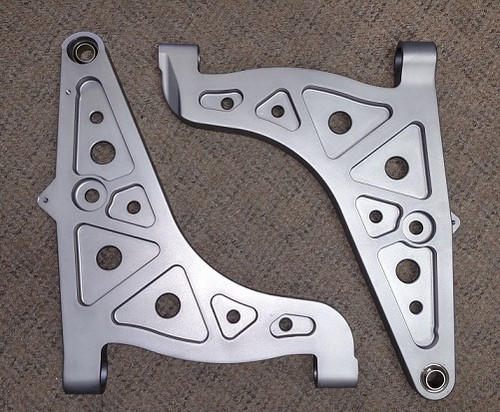 The 944 front control arm has long been know to be a weak point in the car's suspension. There are many differemt failure modes, but the thing that pushed us to make these is that we had two fialures of the factory pins.  The pin broke at the groove that is machined into it so the retention bolt can be installed.  Once this broke the arm literally fell out of the bottom of the spindle and we lost all control of the car as the wheel just flopped around in the wheel well doing a fair amount of damage.  We were lucky to have not hit a wall as this happened while the suspension was loaded in the middle of a corner.

Made from Billet 7075 T6 Aluminium, these A-arms are lightweight, much stronger than the original factory arms, and come with spherical bearings at the front inner pickup and also at the outer ball joint location. Our replaceable pins are tensioned in place, like a wheel stud, so you now have a very strong outer spindle pin that is super strong..