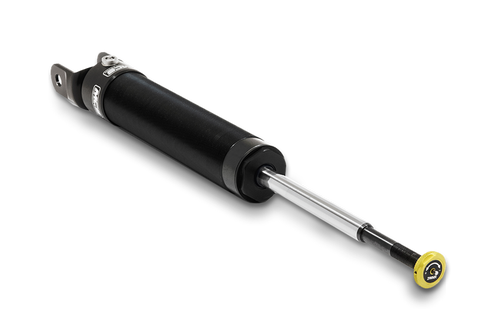 The MCS 2WNR damper is a double-adjustable damper with a unique adjustment mechanism for easy access and fast changes. Both compression and rebound damping forces are independently adjustable from one very clever knob, within easy reach under your hood or in your trunk. No more dragging a jack to pit lane, laying on the ground in your nice clothes or driving suit, or burns from hot brake components.

Damping forces are controlled by blow-off valves directly on the main piston for the most precise and accurate damping control, and not a needle valve with a smaller effective adjustment range before the needle is too far out of the orifice to influence flow.

MCS is our "go to" damper system for our race cars and has been for many years.   I'll tell you a bit about the man who founded the company and who does all the design work as it is important to understand why you should consider buying MCS Suspension.  MCS is headed by Jerome Van Gool, he is the "Brains" behind the designs and his resume speaks for itself. Jerome entered the suspension industry in 1990 and since then, Jerome has been building, designing, and servicing dampers for notable teams such as Alfa Corse, PTG, and GM in ALMS, Trans-Am, DTM, World GT Championship, as well as others.

He has been involved in over 100 European, Asian and US Championships and countless race wins, including 24 Hours of LeMans and the Nurburgring 24. Jerome’s work has also won FIA World GT, World Touring Car, World Sportscar, and a broad range of European and North American GT and Touring Car championships.  So, it is needless to say that he designs one heck of a shock absorder system.

MCS offers some of the worlds best suspension available at any price for race and road going cars.   The application list is extensive and if you do not see your application on the list, just give us a call because MCS can probably make what you need.